What is your “Dope”? 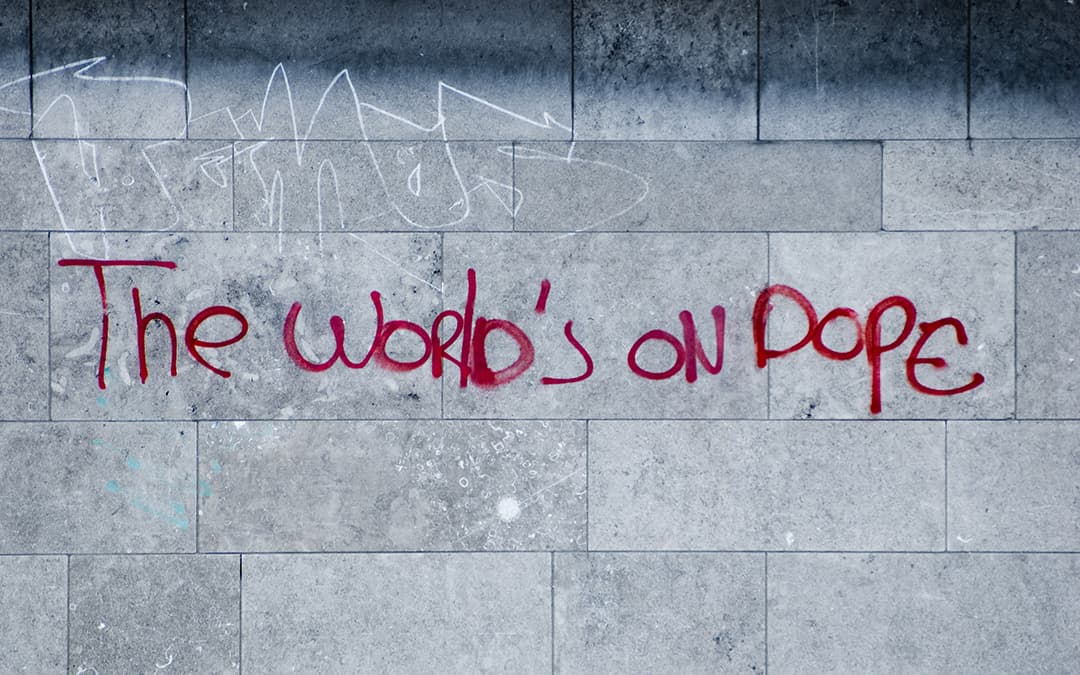 Growing up, I remember that adults referred to every single drug by one name – dope.  Marijuana, cocaine, ecstasy, heroin, LSD – all dope.  It drove me mad, because it sounded like they equated the act of smoking one joint with being a meth head.  Why couldn’t they just call weed weed, and heroin heroin?  Did they just not understand that different drugs were different things, or did they just not care?

Later in life, I realized there was a couple pretty good reasons for this seemingly odd behavior.  In fact, to the parents, and authorities, and mentors, and teachers in your life, everything they labeled dope was startlingly similar to them.  “Dope” was anything that a kid could get wrapped up in and destroy their promise.  “Dope” was anything that scared them.  “Dope” was anything that turned their bright eyed child into a glass eyed shell of a soul.  “Dope” was anything that took their child’s innocence, and didn’t offer (in their mind) anything in return.  “Dope” was the enemy, and it didn’t really matter what kind of dope it was if your kid was doing it.  If your parents asked if you were on dope, they didn’t care what type of dope it was, as long as you stopped doing it.  When a cop asked if you had any dope on you, they weren’t concerned if it was a little bag of marijuana or a kilo of cocaine.  If someone you looked up to thought you were doing too much dope, it didn’t matter if they didn’t understand that you just smoked a little weed with friends on the weekend, they were worried about where you were headed.

From the dope user’s standpoint, there is immense difference in drug use and abuse.  And, truth be told, they are mostly correct – comparing marijuana and heroin is like comparing apples to rotten oranges.  There is a world of difference between smoking a joint after work and being addicted to methamphetamines. Drug use and drug abuse are quite different.  But to outsiders, it often all looks the same.  Parents don’t care what drug you’re doing if you didn’t come home last night – they are worried about your well being, and the dope is what is compromising it.  They don’t have the time or resources to keep up to date on the latest drugs that kids have access to, nor should they.  They just know that before dope, you never missed curfew, you never yelled at them, you never hurt yourself.  It really doesn’t matter if they were wrong and there were other circumstances involved – they could see the correlation between the dope and the change in your behavior, and they had their scapegoat.

In the end, most of us move past our most dope-laden days.  Whether through purposeful, directed change, or just a gradual maturity, most people find that excessive drug use gets old after awhile.  Of course, we all know somebody that didn’t get the message, and they still drink too much, or smoke too much, or use too much, or whatever too much.  But much to our parent’s delight, we usually grow up at some point and leave most of the dope behind.

Or do we?  Maybe we just change our dope?  Sure, maybe you don’t find that doing ecstasy every weekend is fun anymore, but did you replace that with a different dope?  Is your dope now Netflix?  Is it ice cream?  Is it shopping?  Is it sex?  Is it roller coasters?  Is it triple decaf, soy milk, low fat caramel macchiatos?  Maybe weed isn’t your dope, but alcohol is?  Could it be thrill seeking?  The options are limitless.

“Dope” is what we do when we’re seeking pleasure or avoiding pain at the lowest common denominator.  It is that quick, easy shot of something to kill our anxiety, or our worry, or our apathy, or our self-loathing.  It is that thing we need to just deal with our day, to deal with the people in our lives, to deal with ourselves.  It is what we do when we don’t want to do anything.  It is how we avoid and postpone life. We all have our dope – what’s yours?

Likely, we’ll always have some sort of dope in our lives.  Even when you imagine your perfect self (you know, the guy that works out every morning before volunteering at the homeless shelter and then goes to his 6 figure job – that guy), you’ll probably still do dope.  It’s ok, nobody is perfect.  But I think it is important for us to try to take a step back from our lives and find out what our dope is and what it does for us.  I often use the analogy of watching a movie of your life – what would you be trying to tell the main character (that would be you, dummy)?

When you identify your dope, how does it make you feel?  Not while you’re doing the dope, of course, but while you’re watching a movie of your life.  Do you yell at the main character when they do their dope?  Do you yell at them when they stuff their face when they’re trying to diet?  Do you yell at them when they sneak a cigarette, or a drink, or a joint, or a new purse, or a round of golf, or a one night stand, or another damn roller coaster?  Do you just want them to stop when they are sitting there, goofy smile on their face, deep in a dope haze, cramming the last Oreo in their mouth?  Of-fucking-course they are enjoying that Oreo – it’s an Oreo!  But they also just sabotaged their diet plan for the entire week, and just for their dope fix.  Does it drive you mad?

Well, you’re not only the main character, but you’re also the director.  You can change the scene on the fly.  At any moment, you can cut the Oreo scene from your movie.  You can replace the Starbucks scene with the exercise scene.  You can put the main character at a juice bar instead of a McDonalds.  It’s your movie, do what you want with it.  Remember, your parents, friends, colleagues, love interests, and even your enemies will watch some part of your movie.  Do you want them to watch a repeated series of dope scenes, or do you want them to watch a main character overcome his/her weaknesses and better themselves? (Please don’t misconstrue this as to needing to live your life by other people’s standards, just understand that you’re making the movie, and you can make it whatever you want it to be, so make it worth watching.)

So your parents were wrong – “dope” isn’t just any drug on the market.  In reality, it is all of that and more.  Next time you’re doing your dope, recognize it for what it is.  Then when your high has worn off, but before the next craving begins, sit back, put on the director’s cut of your life, and see how the dope scene looks from the outside.  You may find that it is time for another round of editing.